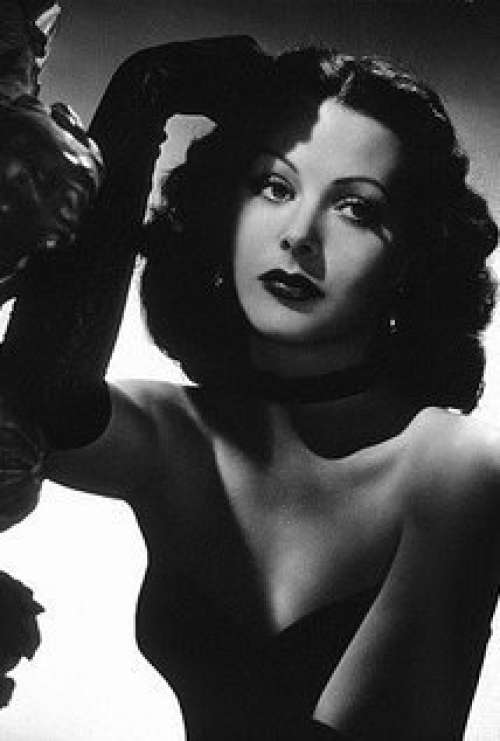 It’s not often you run across a woman who is both intelligent and beautiful. Actress Hedy Lamarr was one such lady. Lamarr, a heart-stopping film star / siren / inventor extraordinaire, had a film career that spanned from the ‘30’s to the 50’s and inventions that included improvements to the modern day stoplight, as well as a tablet that dissolved in water and created a carbonated drink. And a pretty phenominal radio invention, but more on that later.

When I say she was ahead of her time, I’m not kidding.

Ms. Lamarr was the first on-screen sex kitten. Yep, she was the first woman to appear nude in the 1933 film, Ecstasy. The film included the first (and highly controversial) love making scene. She starred in many other films from MGM's Golden Age, against equally dreamy actors such as Jimmy Stewart, Clark Gable and Charles Boyer.

Here’s another fun fact. With all that beauty and all those brains, she had horrible taste in men. Her first husband was a wealthy, extremely jealous, munitions dealer who’s BFF was no less than one Adolf Hitler, the 1940’ version of “He who shall not be named.”

Eventually, Hedy escaped from her husband and, in so doing, fled her home country of Austria. By 1938, she found herself in Hollywood with an agent and her first film contract.

Shortly thereafter, World War II began. With an ex-husband who was a munitions manufacturer, Hedy had an extensive knowledge of various weapons technologies, including torpedo control systems. She was disturbed by news of Allied ships, many with women and children refugees aboard, being sunk by German torpedoes and felt compelled to help.

As fates would have it, Lamarr met George Antheil, a composer who was familiar with remote control technology and orchestrated sequences that he had used in his unusual symphonies, one of which used 16 synchronized player pianos. They made an odd pair of weapons developers, but their backgrounds provided inspiration for their invention.

The patent diagrams included radio transmitters, modulators, relays and oscillators. With all that equipment, you would think it was a complicated design. But the heart of this system is simple, consisting of control mechanisms from two player pianos. The mechanisms ensure the controller and torpedo are playing the same tune. And it is a tune the enemy does not know and cannot guess.

As the torpedo is launched, the synchronized tune plays, which is actually a sequence of numbers on perforated paper that are read by the mechanisms and then frequencies are switched as instructed. This frequency hopping communications system reduces the risk of detection or jamming of radio-controlled torpedoes.

Antheil and Lamarr submitted the device idea to the National Inventors Council, in December, 1940. They received a patent in in 1942, and immediately made it available to the US Military. Although their invention was not used during WWII, the military did develop this technology in the 1950s to detect submarines using sonar buoys that were remote-controlled from airplanes. During the Cuban Missile Crisis in 1962, communications among US ships involved in the naval blockade were secure thanks to this technology.

In the 1980s Lamarr and Antheil’s technology took on a new meanings and applications with the advent of the cell phone. Frequency hopping is the precursor of several wireless technologies used today, including cellular networks, GPS and Bluetooth, and is very similar to “spread spectrum,” which allows for secure cellular communication.

Frequency hopping was not officially implemented by the War Department until after the patent had expired and the rights were in the public domain, so neither Lamarr nor Antheil ever profited from their patent.

However, in the 1990s, Lamarr and Antheil’s work was rediscovered by a pioneer of wireless communications industry, and he realized they had never been honored for their work. In 1997, Lamarr received the Pioneer Award from the Electronic Frontier Foundation (EFF) for her contributions to spread-spectrum technology. Both Lamarr and Antheil were posthumously inducted to the National Inventors Hall of Fame in 2014.

What a shame that her brain was officially recognized more than 80 years after her beauty.