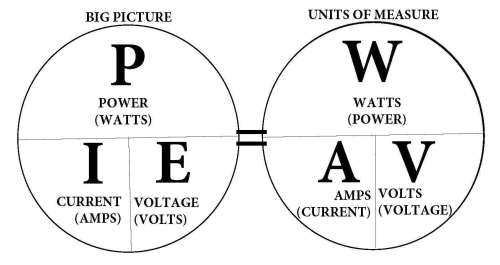 Anyone who’s been around this net for any amount of time and knows me well knows one thing. I have a math phobia that goes back to the day when I had to sit down and explain to my engineer father how I “reinvented” subtraction because the way the teacher taught me was too hard. So little artistic me, I invented another way to subtract. And of course, I missed EVERY question on the test.

Aside from that, though, I’m pretty technical minded. I love to figure out the how and why things work out UNTIL the math comes in. I don’t mind numbers, but anything with a formula? Yick. As it turns out, ham radio has quite a few formulas. I usually ignore them, but every now and then I find a practical application for a formula and then all bets are off. I'll learn it because I NEED TO KNOW IT.

Ohm's Law is one of those "need to know" formulas.

So, in an attempt to educate myself, I decided to learn and understand it. Be one with it. Grasp it. (Deep Breath!) Teach it. (Closing eyes.) Okay, cover me. We're going in. Ohm's Law and WHY you need to know it.

A few reminders of basic definitions.

Electricity, or current, (i) is the flow of electrons through something, such as a wire or circuit and its measured in amps (a).

Voltage (e) is the electromotive force behind that electron that makes it move and it's measured in volts (v).

Power (p) is the rate at which electricity is used and it’s measured in watts (w).

Or PIE for short. I love pie. Cherry pie, lemon meringue, fried apricot pies, key lime pie! To quote my brother… Pie… is good. And when you’re talking about Ohm's Law….Pie is also pretty wonderful, but it doesn’t hold the same attraction as lemon meringue for me. But I digress. Back to pie. Mmmmm. Pie.

Understanding the inter-relations of voltage and current is the key to making Ohms’ Law relevant to you and your hamdom.

A good analogy as to how current and voltage interact is a water pipe. Voltage acts like the pressure in a water pipe and current acts like the water. You can have pressure behind the water but no flow if the tap is turned off. You can have pressure and flow if the tap is turned on. But you can’t have flow without pressure. Essentially then, you must always have voltage or you will have no POWER because there will be no electrons moving.

Back to power. Power (p) – is the rate at which electricity is used and it’s measured in watts (w). If you think about it, this makes perfect sense since the amount of force behind the electrons will be the deciding factor in how many electrons are moved down the pipe at a given time.

It might make this whole thing a little less confusing if there weren’t two different formulas that mean the same thing.

But what we’re actually dealing with here are the units of measure and not the big picture. Power (p) is measured in watts (w). Current (c) is measured amps (a). Voltage (i) is measured in volts (v). So PIE has now become WAV. It’s a happy convenience that they both have a vowel in them so you can remember.

Let’s talk math again. Refer to the picture posted with this blog -- the WAV circle.
If you have two of the these units -- watts and volts, volt and amps, etc, you can solve for the missing element using this circle. Just place your finger over the unknown quantity. The circle will tell you what function to perform. (Divide or multiply.) If what’s NOT covered is on the top and bottom, divide the top by the bottom. If what’s not covered is side by side, multiply the two numbers.

Picking a power supply for your radio. Let’s start with the formula and then talk real life.

If you a radio puts out 50 watts at 13.8 volts, how many amps does your power supply need to be? Place your finger over the unknown, which is amps, then divide watts by volts. (Answer: 3.62 amps.) Now let’s talk about real life. It takes more than 50 watts to *create* 50 watts due to the display and audio circuits. You also don’t want to run the power supply at a full blast on a daily basis. Lastly, as equipment ages it becomes less efficient. So allow plenty of room for error. Let’s double the amps’ answer (3.62 x 2 = 7.24 amps) and then choose a power supply at least one size up from that. For this application, try a 12 amp power supply.

How big does your battery need to be to run a 50-watt radio at 12 volts? Place your finger over the unknown, which is amps, then divide watts by volts. (Answer: 4.6.) Now let’s talk real life. When talking amps in radio we are talking amps per hour. Meaning a 4.6-amp battery would run your radio for one hour -- if your system and battery are in pristine, like-new out-of-the box condition with a 1:1 SWR. Again, that’s one hour, then the battery is stone-dead. Not a good status for a battery to be in. So if you want to run one for four or five hours, you’re probably going to need something along the lines of 35 amps. One more little piece of advice. When purchasing a battery, buy a deep-cycle marine battery and buy one that has is rated AHr (amps per hour) and not CCA (cold cranking amps). They are actually different designs.

Practical application number three. How to calculate the recharge rate for a battery from a solar panel. Let’s do the math and talk real life afterward.

Well that's it. A practical application for math. Who knew? This one is a good one though it took me a couple of years to warm to the idea. I hope it takes you way less.