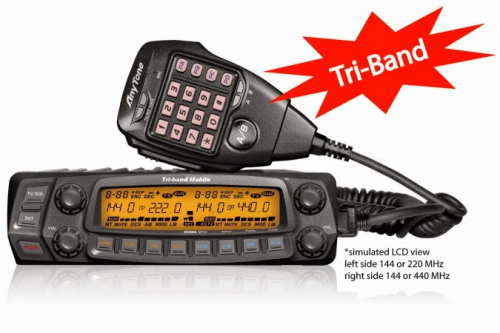 Thanks very much to Jim Erickson, KB0DBJ, for the topic as well as the blog. Thank you very much, sir. Your Rock!

The 1.25 meter or 220 MHz band is a portion of the VHF radio spectrum internationally allocated for amateur radio use on a primary basis in ITU Region 2, and it comprises frequencies from 220 MHz to 225 MHz. In the United States and Canada, the band is available on a primary basis from 222 to 225 MHz, with the addition of 219 to 220 MHz on a limited, secondary basis for digital use.

Some experimental amateur use in the U.S. was known to occur on the 220 band as early as 1933, with reliable communications achieved in fall of 1934.

Amateur use of VHF and UHF allocations exploded in the late 1960s and early 1970s as repeaters started going on the air. Repeater use sparked a huge interest in the 2-meter and 70-centimeter (420–450 MHz) bands, however, this interest never fully found its way into the 220 band. Many amateurs attribute this to the abundance of commercial radio equipment designed for 136–174 MHz and 450–512 MHz that amateurs could easily modify for use on the 2-meter and 70-centimeter bands. But since there were no commercial frequency allocations near the 220 band, and little commercial radio equipment was available. This meant that amateurs who wanted to experiment with the 220 band had to build their own equipment or purchase one of the few radios available from specialized amateur radio equipment manufacturers.

Also, 220 is not a ham band in Europe or Asia, many manufacturer’s largest markets, although it is allowed in most of North & South America.

By the 1980s, amateur use of 2-meter and 70-centimeter bands was at an all-time high while activity on 220 still remained stagnant.

In an attempt to increase use on the band in 1987, the FCC modified the Novice license, the entry level license at the time, to allow voice privileges on portions of the 220 band. In response, some of the bigger amateur radio equipment manufacturers started producing equipment for 220. But still the band struggled.

In the late 1980s, United Parcel Service (UPS) began lobbying the FCC to reallocate part of the 220 band to the Land Mobile Service. UPS had publicized plans to use the band to develop a narrow-bandwidth wireless voice and data network. UPS's main argument for the reallocation was that amateur use of the band was very sparse and that the public interest would be better served by reallocating part of the band to a service that would put it to good use.

These plans never developed though & this part of the band 219 to 220 MHz was reallocated back to the amateur service for digital purposes on a secondary basis effective January 2006.

Recently Chinese companies have begun manufacturing equipment for the 220 band as it is a commercial band in China. Several notables are the Jetstream, TYT, Wouxon, Baofeng.

One of the biggest objections to using the 220 band has been the need to run a separate radio, but recently several companies have attempted to create triband radios (2m, 220 & 440) with the most successful so far being the Anytone AT-5888UVIII.
Bridgecom has also started manufacturing a standalone repeater for 220 as well as a HT and a Mobile radio.

Due to the recent surge in ham activity & the crowding of other frequencies a lot of hams are beginning to consider 220 band for their group activities.

It's a great band, with characteristics similar to the two meter band, and has certain real advantages over the 2 Meter band such as a lower noise floor and smaller antennas!

In the last few years, several new repeaters have gone up in the area most notably in Mansfield, Denton, The Colony, Dallas and Aledo.