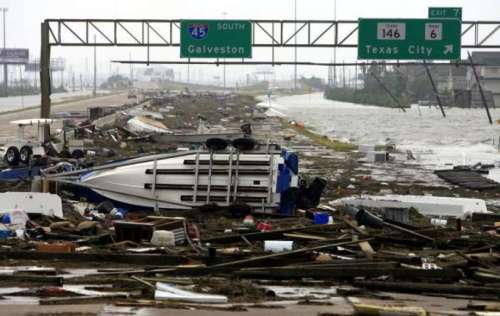 I’d like to introduce you to a very good friend of mine. Here’s the story of how she got involved in ham radio:
…

When I was growing up, I read a few things about ham radio. It sounded totally cool. But I didn’t know any hams, and I studied history, not science, so I never got involved. Years later …

Molly, a dear friend from Galveston, escaped the island just before Hurricane Ike came ashore in 2008. It caused at least 62 deaths (human deaths). Countless cattle and horses, cats and dogs, and other animals died.

Molly was up most of the night before, and her greatest fear was of falling asleep before she could leave. When I didn’t hear from her, I called and told her she needed to leave right away because they were closing the causeway – which is the long bridge between the island and the mainland coast of Texas. Once that’s closed, you can’t get on or off of the island. She quickly put two Great Danes in her small car, a few belongings, and started off.

Highways were gridlocked. Forty-five thousand people from Galveston inched along at 5 miles an hour, and hundreds of thousands of other drivers poured onto the roads, fleeing the coast.

Every filling station she saw had a large sign that said “Out of Gas.” Her car had no air conditioning. She was alone, with no one to help make phone calls or plans. As a diabetic, she was struggling with insulin levels and felt terrible. But she had to go on.

Houston to Dallas is a 5 hour drive that took her almost 10 hours. As it got dark, I worried. I had no idea where she was or how she was. Late that night, a stranger called from a shelter 20 or 30 miles south of Dallas and said: your friend is here but can’t drive anymore, she has collapsed. I jumped in my car and drove down there to get her.

When people talk about keeping your gas tank topped off, your cell phone charged, being prepared for the unexpected, keeping a little food in the car – or having a packet with your important papers or medicines near at hand – I think of Molly, and of the hundreds of thousands of people unexpectedly in gridlock as a hurricane was headed their way. Complete strangers went out to the highways and helped Molly and others, providing water, snacks, bathroom facilities and a place to pull over and rest in their cars.

When she got here, she stayed for about a month. She was in very bad shape. She had to find new doctors and get new prescriptions. She had to replace clothes and food, and file insurance claims (thank heavens for flood insurance and for the Small Business Administration). Many Galveston homes were destroyed. Hers flooded with 8 feet of water and was no longer inhabitable.

There were many kind neighbors and acts of compassion, as well as helpful government programs. But when you lose your home, it’s a terrible loss. It was like a physical blow, and she suffered physically as well as emotionally. She was depressed for a long time.

Every day she was in Dallas, she wanted to know when she could go home. I’d tell her that she was in no shape to get on the road again. But I’d look at the Galveston website for information. The authorities wouldn’t let residents back on the island for weeks because it was unsafe. While searching for information, I learned about CERT, Citizens Emergency Response Training. Galveston had a program that trained people to prepare before emergencies happened. What a great idea!

I took the free Dallas CERT training. A few weeks later they sent me an email and said that Allan Batteiger, WB5QNG, was going to teach a class on ham radio. I attended his class, got a license and then discovered the 6:30 p.m. DFW National Traffic System traffic nets, held every day on 146.88 MHz with PL 110.9.

Sometimes – many times – I would get off the air and say to myself: there is so much I don’t know. I shouldn’t get on the air again. But I realized that if I wanted to learn, listening was not enough. I needed to get into action, and to practice in order to gain experience and skills. It was more important to focus on what I could learn instead of what I didn’t know. So I made myself get on.

What happened over time? Molly moved to Ohio. She doesn’t want to see a hurricane again as long as she lives. It has taken her years to recover. And sometimes I’m not sure she’ll ever fully recover from losing her home, her friends, her community, her hopes and dreams of what she wanted for her life.

Galveston has rebuilt. It’s a fun place to go. Ocean waves surge onto the shore while people relax and play on the beaches.

I get on the DFW traffic net, and have told Molly several times that at least one good thing came out of her disaster – I got involved with my own community and got to learn about ham radio.

Molly tells me of other good things that happened to her:

* She learned of the kindness of the many complete strangers who helped her along the way. Not to mention the SBA FEMA people who made her difficulties so much easier.

* When she moved to Ohio she formed new friendships, and found a bigger house with a huge backyard for those HUGE dogs.