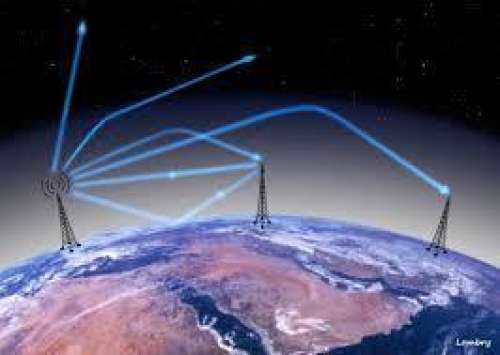 “Let’s do a topic on propagation,” I thought to myself. And then I dove in. As it turns out, propagation is a broad, b-r-o-a-d, B – R – O – A - D, topic. What I’ve written here is the compilation of about six or seven different Wikipedia articles. You know that “we take donations” thing Wikipedia has on their home page? I owe them at least half of my annual salary.

What can I say? Wikipedia is to nerds what Pinterest is to crafters…. A bottomless pit. Take my advice. If you decide to go researching it yourself…DO NOT click on every blue link you see. It took two days before the office finally came looking for me. That was two days too many!

Propagation can be divided into three categories:

Groundwave Propagation interacts with the semi-conductive earth by clinging to the surface and following the curvature of the globe. Due to the wave characteristics, this mode is best suited for low and very low frequencies, which are usually designated to military marine communications such as ship-to-ship or ship-to-sub.
This type of propagation also includes the normal bouncing around radio waves do in the atmosphere due to reflection, refraction, absorption, scattering, and diffraction.

But probably *the* most common form of UHF / VHF communication is Line-of-Site Propagation. The meaning is to be taken literally: It is the propagation of waves between two antennas that see each other. (Ergo – “line-of-site!”) Line-of-site propagation relies heavily on ground plane reflection. Ground planes are conductive surfaces that serve as part of the antenna. It could be the surface of the earth, a body of water, or it could be other antenna elements in eighth-, quarter -, half-, or full-wave lengths, positioned at a 90-degree angle (or slightly more than 90) from the main radiator.

Next is Ionospheric Propagation. This type of propagation is extremely unpredictable because a good deal of the wave's squirrelly behavior is based purely on chance interactions within the Ionosphere. Atmospheric layering itself varies based on time of year, time of day and solar activity. Meaning as the sun sloughs off solar trash, it lands in the highest part of the atmosphere, the Ionosphere.

That’s when things get interesting.

Let’s start with a few basic definitions to help us through the headier stuff later:

Propagation – Since we’ve already mentioned it, let’s define it. Propagation is the behavior of radio waves as they travel from one point to another through various parts of the atmosphere. As they travel along, they change their trajectory due to collisions with other objects. The direction they move after that collision is decided based on the angle at which the two objects collided. Waves can be reflected, refracted, diffracted, absorbed, polarized or scattered. There are many factors that affect atmospheric propagation but probably the big three are: space weather, the frequency of the wave and the available water vapor in the atmosphere.

Solar Storms – Solar storms happen when the sun ejects particles and hurls them towards the earth. These positively or negative charged particles interact with our atmosphere and can create havoc, mayhem, or, just to throw us all off, they may create absolutely *perfect* conditions for RF propagation. Because of this, some HF’ers check the solar-weather forecasts before heading to the airwaves. Or they may not head to the air at all, depending on the forecast.

Ionosphere – The Ionosphere is a region in the earth’s upper atmosphere that includes the D through F layers. This layer becomes electrically charged by solar photons and cosmic rays creating large regions of ionized plasma that undulate like an ocean wave, causing signals to fade in and out. From a measurement standpoint, this zone starts at about 31 miles and spans all the way to 620 miles above the earth’s surface. Did she say 31 and 620? Yep, that’ s in miles just so you’ll understand it. For a nice even number, we’ll go with what the rest of the world would say: 50 to 1000km.

Okay, let’s talk about some of the fun things you can do with your radio waves.

Did you know you can skip a radio wave just like you skip a stone? Granted some of us are better at skipping stones than others… My daughter never did catch on. But where was I? Oh yeah… skipping… Radio waves can bounce off ANYTHING. Like a pinball they careen and bounce and even break apart, depending on what they hit. And you can aim them at all kinds of crazy stuff…

Yep. It’s possible to bounce your signal off a meteor shower. Meteor Scatter Propagation involves reflecting radio waves off the intensely ionized columns of air created by meteors as they pass through the atmosphere. This method is generally used for VHF propagation, otherwise known as the two-meter band.

You can’t say Auroral -- (Actually, neither can I. Aurorrrowl. Aerial. Aur-Ror-al. Auroral. Whew! OVERS!) You can’t say Aur.o.ral Backscatter without thinking “Aurora Borealis”. They’re more than just a pretty face. These beautiful light shows create highly-ionized, concentrated columns of air that stretch for hundreds of miles vertically. The physical process of “backscattering” is the reflection of “something” (waves, particles, signals, turtles… just checking to see if you were paying attention) back in the direction from whence they came.

Radio-auroras are dependent on solar flares, coronal holes and mass ejections, so solar forecasts play a prominent role in backscatter. Backscattering is best used in HF and VHF (two-meter) and is predominant closer to the poles. Rarely are you able to achieve backscatter in the mid-lattitudes. You know, like Texas. But … I felt inclined to mention it since it’s a “thing” in other parts of the world.

The E-layer is of the middle layer of the Ionosphere. During daylight hours, the D layer is present, but at night time, the D layer disappears and the E layer is the first layer of the ionosphere. This layer can become electrically charged during solar storms or sun spot cycles. This produces small, thin clouds of intense ionization which can support reflection of radio waves.

Sporadic E can happen at any time of year but it is more frequent in the summer months. It can happen during any type of weather and over any terrain. Generally Sporadic E events last anywhere from a few minutes to a few hours and typically effect the HF or bands below 125 MHz. (Again, the two-meter band.) Signals can skip as far as 1020 miles. One hop of a radio signal could be anywhere from 560 miles to 1600 miles!

There’s a million different methods to it, but it breaks down to this. Tropospheric RF activity usually happens during warmer weather when the barometric pressure is high and is more common over flat terrain like ours. TSFDDS is due to a weather phenomenon called atmospheric inversion, which occurs when a warmer layer of air forms over a cooler layer of air. This creates an atmospheric cap. Not only does the cap keep cooler weather trapped, it also keeps radio signals trapped in the lower atmosphere.

Because they stay low, RF signals can be received by repeaters hundreds and in extreme cases, even thousands of miles away. They hug the surface of the earth, extending just slightly beyond the curvature of the earth before dropping off. Conditions may last a few minutes or several hours. Tropo skip can happen in any band, but is most prevalent over 100mHZ. Meaning the two-meter, 220 and 440 bands.

Well, that’s it. As promised -- a very B-R-O-A-D overview of propagation. I took one for the team on this one. Trust me, if you don’t want your office to come looking for you, just don’t go there.