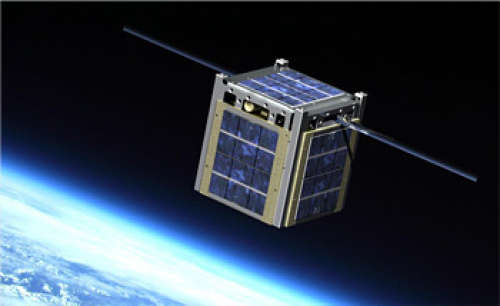 A few months ago while speaking at the Arlington Amateur Radio Club, I was lucky enough to listen to a presentation on Amateur Radio in Space presented by Keith Pugh, W5IU. At the time I thought, “I should get that guy’s information and ask him to come do a topic on the net.” Of course I forgot. Two or three months later, I was speaking at the Cowtown Amateur Radio Club and there sat Keith again. This time, I wrote his callsign down with the intention of QRZing him. I lost the paper no sooner than I left the meeting. In June, I ran into him at HamCom and *that time* I hooked me a bass. Third time’s a charm!

Keith is the area coordinator for the AMSAT program (Radio Amateur Satellite Corp), which covers two to three states. He is also a technical advisor and mentor for the ARISS program (Amateur Radio on the International Space Station). He’s a busy guy, our Keith, and he loves to talk about his two favorite subjects: ham radio and space.

Those of us old enough to remember those classic words “Space, the Final Frontier” also remember the great International Space Race. It was nothing like that zany movie with Tony Curtis. This was *serious* political business.

But if you happen to be a youngster, I’ll clue you in.

The United States and Russia used to be frenemies. We raced those Ruskies to the finish line of every imagined competition we could think of like two close-in-age siblings. It was a full-speed breakneck race between “us” and “them” and it was never quite clear which brother was going to elbow the other one out of the way at the last minute to take home the gold. We raced via submarine to the depths of the deep blue and via space ship to the moon and beyond.

The one-upmanship continued and we spared no expense. By 1983, the US was launching costly high-altitude satellites, as well as manned space stations. In 1996, we launched the International Space Station and amateur radio was on-board from Day One.

That speaks volumes about the value placed on amateur radio by NASA and other space agencies. It serves as backup communications for the space station and allows astronauts to speak with family, friends and the community at large during their downtime. What a welcome break from the doldrums of day-to-day life in space. It’s no wonder that astronauts often make contacts with hams around the world.

Today, there are tons of satellites, or “birds”, in low-earth, high-earth, and geosynchronous orbits. Their use and purpose varies and they are launched by large and small countries alike, as well as private industries.

As with everything technology related, birds have gone from huge to teensy tiny. Behemoth high-altitude satellites have gone the way of the dinosaur. Meet… The cube satellite. These completely self-contained sats measure 4” x 4” on the sides and can be anywhere from 4” to 12” long. The 4” x 4” x 4” ones weigh-in at about 2.2 pounds and run on 3-400 milliwatts.

Evolutionarily speaking, we’ve gone from Archaeopteryx to a Hummingbird.

Logically, Hummingbirds are way cheaper to build and easier to launch than the giant archaic birds of the past. This is where AmSAT comes in. AmSAT builds, launches and operates amateur radio satellites. They also partner with ARISS and NASA to piggyback their sats onto other launches. They do all of this using strictly volunteer staff, with the exception of their 40-year veteran office manager, Martha. (Good deal! Office managers and admin assistants should be paid twice “accidentally” anyway.)

ARISS, on the other hand, is a cooperative program that works with the National Aeronautics and Space Agency (US); the Rosaviakosmos (Russia); the Canadian Space Agency (CSA); the Japan Aeronautics Exploration Space Agency (Japan); and the European Space Agency. Their primary goal is to promote the Science, Technology, Engineering, and Math disciplines to school children by arranging contacts with astronauts on board the International Space Station. To date, ARISS has worked with over 1000 schools and scouting groups to make those contacts happen.

And it’s not easy.

Contacts can be made one of two ways: Direct contact or by telebridge.

For direct contact, everyone has to be in the absolute perfect place and time in the universe for this to happen. After all, the space station travels the skies at approximately 17,000 mph! Coupled with atmospheric issues, contact efforts can be a short, sharp, shot in the dark.

Telebridge is a little easier. Consider it to be a space-type teleconference.

Which method is used depends on equipment availability and the experience level of ham radio volunteers involved, as well as any orbit-related technical issues with respect to the school or scout’s location.

But back to Keith. Remember I mentioned he was the area coordinator for the AMSAT program and also a technical advisor and mentor for the ARISS program? I’m thinking Keith is a pretty happy guy these days. He’s a ham at heart, of course. But that twinkle in his eye? I’ve no doubt its directly related to the joy of watching a child’s eyes light up when they speak to an astronaut on the INTERNATIONAL space station. Using ham radio. How cool is that, REALLY?

Plus, kids are very curious and they ask all manner of questions. What’s life on the space station like? How does it feel to be launched into space? I’m sure the question of “How do you go to the bathroom?” comes up with every contact. But in between all that, in between the actual contact itself, kids are interacting with volunteers asking other questions. Questions about ham radio, engineering, physics, astronomy and the like.

The seeds of knowledge are being planted in those fertile little minds without them ever realizing its "education". Sneaky, huh? Well, desperate times call for desperate measures. After all. Today’s eight-year-old is tomorrow’s great scientist. Nothing is better than that. One of my mentors talks about “ripples in the pond”. What you do today causes ripples that expand outward even after you’re gone. What a fabulous, positive concept! Wanna feel better about where we're heading? Check out these fabulous ARISS videos on YouTube www.youtube.com/results?search_query=ariss (Warning, these can get addictive.)

If you know of a school interested in making a contact or if you’re interested in becoming a volunteer, check out the ARISS website for more information at www.ariss.org. More information on AmSAT can be found here. www.amsat.org. Remember, these two groups work together. Which I’m sure is how Keith ended up working with both.

Well that, and he likes working the birds from home. If you’re interested in working birds, too, look into easy sats. Easy sats are FM satellites that can be worked with a dual band HT, or two single band HTS. (You need two bands, one for the uplink frequency and one for downlink frequency.) Again, that’s plain old UHF/VHF -- 2 meter 440 – with a small Yagi antenna. It can be as simple or as complicated as you want to make it.

I’ve never done it. But a few weeks ago I did net control on the Six Shooter Weekly Ragchew and Information Net (Thursday nights at 7:30 on 145.330, 110.9 tone) and someone checked in who had just made their first contact with a bird and they self-described as “hooked”. I can only imagine.

For more information on working the birds, try these nets:

If you’re interested in contacting the International Space Station, check out the published orbital schedule.