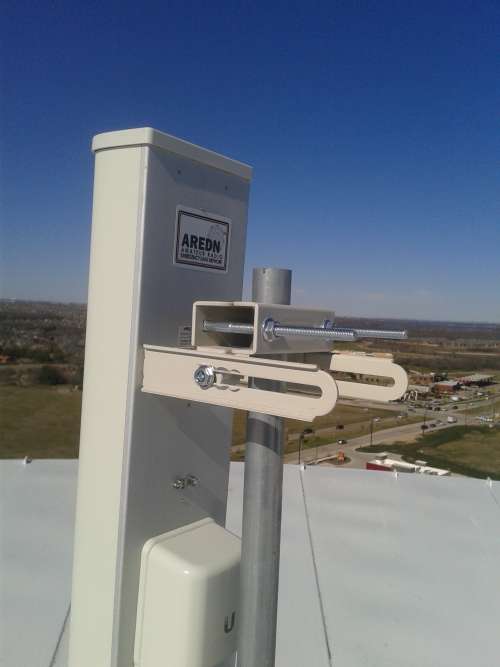 Special thanks go out to David Erickson, KB5UGF, for taking time out of his busy schedule to present this topic to the YL NTX Weekly Net. As many of you may know, my “official club” is the Mansfield Johnson Amateur Radio Service, or just MJARS for short. David is the MJARS Meshnet Guru. Meshnet is a heady topic, but David manages to break it down into small manageable brain bites that make it easier to understand. Ironically, shortly after this net, I attended Ham-Com and was able to attend two meshnet seminars presented by the firmware developer. It’s fascinating stuff, really. The more you hear about it, the more you’ll realize, Meshnet can do most anything, including bake you a cake… Well, maybe not ... but it *is* pretty spectacular.

There are all types of hams out there. There are those who like to chat up the local repeaters, a sector who prefer HF, a few intrigued by space communications. There’s the contesting crowd, the digital group, the APRS masters, the DX contesting set, the CW buffs, and some who just like new technology. Then there are the EmComm-ers.

EmComm-ers are a special faction of hams who see the hobby as an emergency-preparedness communications tool (EmComms). They are the storm spotters. The “What if?” ponderers. In short, they are always, always thinking.

Enter Meshnet, the goyle of the EmComm-er’s dreams.

Meshnet is the brainchild of the folks at the Amateur Radio Emergency Data Network (AREDN). Succinctly put, AREDN developed a firmware that can be flashed onto rugged piece of hardware called a node. The firmware enables the node to function as an outdoor “pseudo-Wi-Fi” device. Only instead of operating on the Wi-Fi bands, it operates on the ham bands.

Unlike your typical UHF/VHF/HF radios, meshnet operates on much higher frequencies. This allows the node to get the signal up and out of the radio clutter. Each meshnet system can choose from four operating bands -- 900Mhz, 2.4Ghz, 3.4Ghz, 5.8Ghz. There are advantages to each band, but as a meshnode station, in order to communicate with other nodes in your meshnet system, everyone has to be on the same band. MJARS uses the 2.4 gig band, which is located right underneath the cellphone bands in the ARRL band plan.

The power of the meshnet is in the number of nodes in your network. But you only need to be able to access one other node to be into the system. Which is beneficial since mesh nodes are line-of-site only. Per David, mesh nodes have a range of approximately 15 miles or one tree, whichever comes first.

“Really, Allison. That’s great. But what exactly can you do with meshnet?”

Simple my pretties. You can do anything as long as it conforms to CFR Part 97.1. Okay, okay, I can tell by your attitude, you want me to wow you. Well, you can connect your computer, digital cameras, IP telephones, video cameras, and of course, a radio – with the proper interface. And it’s fast. I mean really fast. Fast enough to carry multiple video streams as well as other forms of data simultaneously. But again I reiterate, anything accessed through a meshnet node must conform to CFR Part 97.1. This means no streaming of TV, music or accessing anything that contains an advertisement. (Pecuniary interests, don’t you know.)

You can communicate via keyboard chat, IP telephones, send email, share files, or view a live feed from your video camera… Oh wait... You can also view a live feed from someone *else's* video camera. Real time. While controlling the pan, tilt, and zoom functions of same said camera. It doesn’t even have to be the camera of the nearest visible node.

Pretty cool, right? I bet that would be darn-right handy during…. oh, I don’t know… storm season, perhaps? So much better than sending a junior reporter (aka “storm spotter”) out into the hurricane to report that it is, indeed, raining. Just point the camera in the direction of the ominous-looking dark cloud while hiding in the safety of your interior bathroom with your radio and your laptop. Sounds like a no-brainer to me!

Are you ready to get started? If so, start chatting it up at the club meeting or on the local repeaters and find out who's close to you that may already have a mesh node. Find out what direction their node is facing and the approximate beam width of their node. Then do a site survey of your property to determine a suitable location for your node. Once you have established a good location, choose your hardware.

The original meshnet nodes were made from refurbished Linksys Wi-Fi routers, but the equipment had to undergo extensive weather-proofing modifications in order to withstand the elements. In addition, the Linksys routers could handle the AREDN firmware, but were unable to go “ham band only”.

Today, the easiest mesh node solution it so buy a brand-new node from Ubiquiti Networks, which are manufactured to withstand the elements.

There are two choices that rise to the top of the cream:

To set up your mesh net, simply download the AREDN firmware onto the equipment straight from the AREDN website. Once the firmware has been loaded onto the Ubiquiti node, you can then choose your band settings, be assigned an IP address, and just like that, you're on the system. You're node will immediately find all the other nodes close to you and give you dynamic signal ratings.

It really is just that simple.