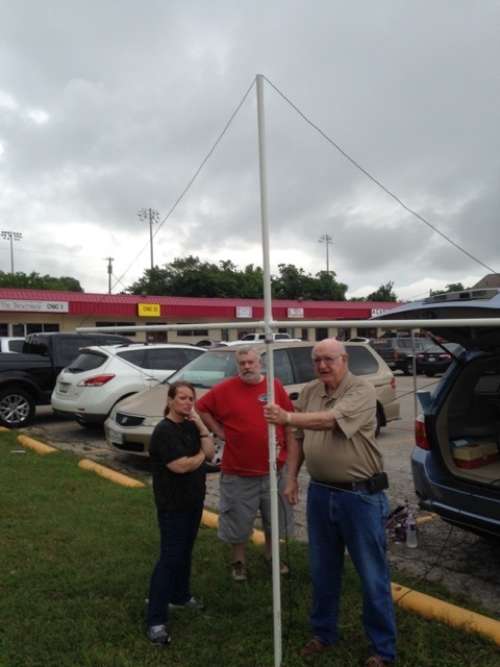 The following is a guest blog post I wrote for the South West Dallas County Amateur Radio Club. Thanks to Jerry Keltner and Justin Long for letting me tag along. Had a GREAT TIME chasing that fox.

Hope you enjoy the recap!

Murphy’s Law isn’t just some metaphysical clap trap. As scientifically minded as we hams are, there comes a time when you have to throw it all out the window, close your eyes and point. And whatever choice you go with, just know – it’s gonna be wrong. Never mind that the odds *should be* 50/50. Trust me, kiddo, they ain’t.

Such was the case one early June morning when I was standing around the Acapulco Diner parking lot with a group of hams from SWDCARC. We were trying to choose an initial direction to head for our fox hunt. Jerry Keltner, KB6OJE, pulled all kinds of wondrous looking techy-type ham gear out of his SUV and under his watchful eye, we constructed a gynormous PVC framed, wire-loop antenna. At the predetermined time, the fox began transmitting “VVV VVV DE W5WB FOX HUNT “and the hunt was afoot. Slowly we twisted that behemoth antenna around, listening closely for the signal null.

On a completely unrelated note, at the time I was also studying for the Extra exam. I remember some questions about that wonderful loop antenna of Jerry’s. The major advantage of loop antennas is: They are great for direction finding because they give really good signal nulls. The major disadvantage is: They have a bi-directional pattern. Meaning when you receive a good strong signal the origination point could be straight ahead of you or directly behind. Which brings us right back to “choice” and Murphy’s Law.

But let me back up a minute and tell you how I got to be in that parking lot to begin with.

In May I visited the Southwest Dallas County Amateur Radio Club meeting to give a quick promotional talk about the YL North Texas Weekly Net. I stayed for the meeting, surrounded by “The Justins”, who I'd met at the Ellis County ARES meeting the month before. And that’s where I heard those enticing words — “fox hunt”.

Fate is a weird thing. Not a month prior I presented the fox hunt technical topic on the YL net and published a blog post based on the same subject. Based strictly on research and no real-world experience whatsoever. (Thank you Googlator.) Anyway, having never personally experienced one, as soon as I heard “fox hunt”, my ears perked up like my Chi-Weenie when she eyes her favorite ball.

A day or two after the meeting, I was busily emailing people and making plans for the Saturday morning fox hunt. I drove over from Burleson and had a nice breakfast at Acapulco with some great guys from SWDCARC, most of whom I recognized from the meeting. At about 7:30, we disbanded and a few of us headed over to Jerry’s SUV for a meetup. There was Jerry; Floyd Rodgers, KC5QBC; Justin Long, K5JTL; Les Wong, K5ITO and myself — Allison Hollier, KG5BHY.

This was the group that constructed the aforementioned wire-loop antenna. Which worked beautifully. Other than the one teensy-tiny flaw wire-looped antennas have. Which, to recap, is the fact they give old Murphy an opening. Once we isolated the frequency, Jerry took out his handy dandy map and compass and the question was… East or west?

By then, the crew was down to Jerry at the wheel, Justin in the back with the attenuator and map, and me in the passenger seat with a much smaller version of the wire loop. We chose to head west. Which again, to recap, due to Murphy’s Law 50-50% rule, was wrong. But of course, we didn’t know that at the time. But hey, this is what fox hunting is all about. Chasing the fox and learning as you go.

Jerry is a well-seasoned fox hunting pro. But Justin and I were complete greenhorns. Well, maybe not *complete* greenhorns. There is such a thing as knowing just enough to be dangerous. I don’t know about Justin, but I definitely fall into this category. Couple that with the nickname my girlfriends assigned me years ago (Miss Direction) and it’s a deadly combination for a fox hunt. I just tried to keep my mouth shut when someone asked, “Which way do you think we should turn?” Between me and Murphy, even when there are only two choices there is no correct answer.

We started at the restaurant in Desoto, then went west to Cedar Hill. On several occasions along the way, Jerry pulled over to the side of the road so I could perform a quick directional check with a wire looped antenna. For the most part though, the signal was loud and clear sitting right inside Jerry’s van.

Onward we went, further west to Joe Pool Lake, then south to Midlothian, then east to Ovilla, all the while receiving a perfect signal. We never needed attenuation, we were just receiving. I think that was the final clue we *might* be wandering in the desert. So we asked for a hint. Actually I believe what Jerry said was, “If you guys have plans for dinner this evening, you might want to throw us a bone.” Or something to that effect.

Since I did some research while writing the blog, I was familiar with stories of the fox taunting the hunter, but I’d never really seen it in action until Jerry got on the talkin’ frequency to ask for that hint. Thanks to APRS, the foxes were well-aware that the hunters were chasing their own tail. And so the taunting began.

“Gee, y’all were closer when you started than you are now, Jerry….Or were you?”

After some discussion in the car, we decided we made a bad choice in the very beginning. Of course this was perfectly logical, but if we’d second-guessed ourselves, that choice would have been wrong, as well.

We did catch the scent as we doubled-back north. Lo and behold, we lost the signal null. We were hot on her little furry fox tail. In order to find the null again, Justin added a little attenuation. And then a little more. Finally, we were up to 65db of attenuation! Red hot!

Jerry and Justin knew things I didn’t. Like “So and So lives over here. And doesn’t So and So have a summer home out that way? What about So and So? I think he works over this way. Start looking for anything that might be familiar!”

We hit a crossroads and eventually we headed east to Glenn Heights. Which is where we found them. In the parking lot of Bear Creek Baptist Church. There sat Bill Ellis, N5TXN,Vice President of the club; Barry Fulfer KF5JPE, current President of the club; Brandee Fulfer, KF5RTU, YL of Barry; and Harold Wheat, K5HDW Program Chair.

Out in the field beside the church was an 80-meter antenna and guy wires. On the table, an HF rig and power supply. A little team work made quick work of the tear-down and after a brief chat, soon we were headed back to Acapulco to pick up our individual vehicles.

It made for a merry morning chase. By the time it was over we had driven almost 33 miles and put in two hours. The kicker is, the church was only 2.5 miles due South of the restaurant where we started!

Seriously, just who was that Murphy guy, anyway? Apparently, he could have used a little couch time!